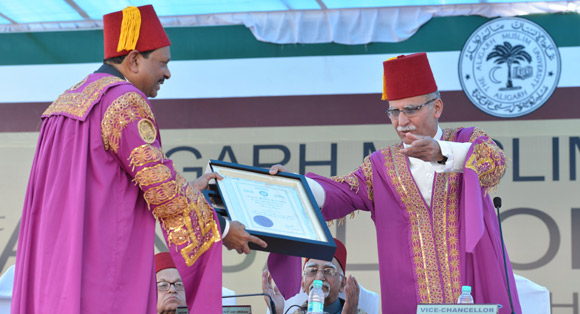 Aligarh: Mr. M.A. Yusuff Ali was conferred with D. Litt., honoris causa, at the 61st Annual Convocation Ceremony of Aligarh Muslim University on 29th March 2014. The citation for the conferment of D Litt was read by Pro-Vice Chancellor of the university, Brig. (Retd.) S. Ahmad Ali.

Uttarakhand Governor Aziz Qureshi was also awarded D Litt, honoris causa, at the ceremony. The chief guest of the event was Vice President Mohammad Hamid Ansari who delivered the convocation address and presented degrees to 5000 graduate, postgraduate and PhD students.

Yusuff Ali M.A. said that he felt humbled by the honorary degree and paid his respects to Sir Syed Ahmad Khan, citing him as one of the architects of modern educated India, in his acceptance speech. He inaugurated the website of Aligarh Muslim University at the Vice Chancellor’s lodge. He also laid down the foundation of a sports complex for male students to be constructed with a donation of Rs. 5 crores. Yusuff Ali has also announced a separate endowment of Rs. 5 crores for construction of another sports complex for girls in the name of his mother. The foundation stone of this complex will be laid down by Mrs. Sabiha Simi Shah, wife of AMU Vice Chancellor.