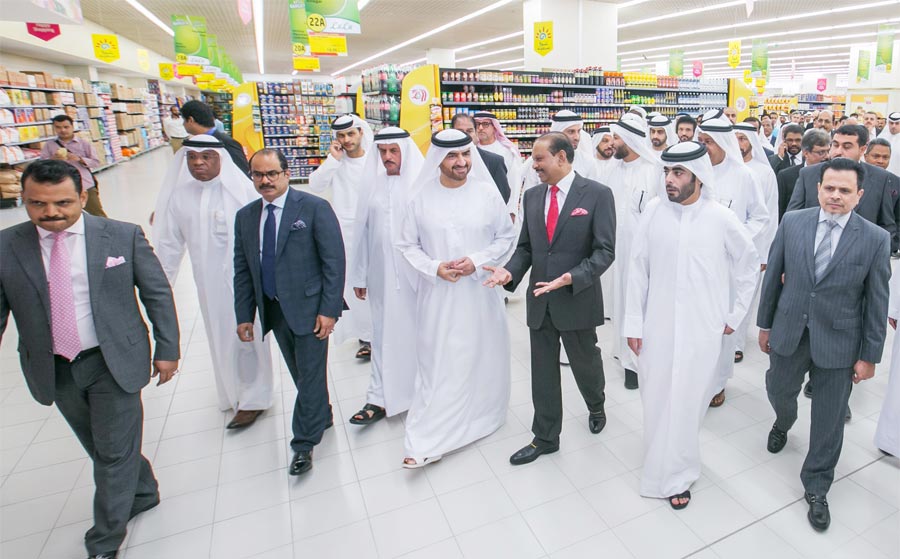 Sharjah: Lulu Group has further expanded its presence in the northern emirates by opening biggest ever Hypermarket in Sharjah. The new store which is 140th store of the group was officially inaugurated by His Highness Sheikh Abdullah bin Salem bin Sultan Al Qassimi, Deputy Ruler of Sharjah & Deputy Chairman of Sharjah Executive Council at Al Hazna in the presence of number of dignitaries and businessmen.

After the inauguration, His Highness Sheikh Abdullah bin Salem bin Sultan Al Qassimi and other dignitaries were led on a guided tour of the hypermarket by Yusuff Ali MA who briefed them about the various sections, unique features and amenities.

“This is our sixth store in Sharjah and second one we opened in 30 days. This shows the kind of demand for quality shopping that exists here and we are extremely happy to bring again another world class shopping experience as close as possible to the residents of Al Hazna and its nearby areas” said Yusuffali.

The new hypermarket is spread over an area of about 160,000 square feet and is located next to Khalid bin Mohamed Stadium or Al Shaab Village & can easily accessed by residents of Al Hazana and its surrounding areas. The groceries and supermarket section will occupy the ground level while the first floor will showcase Lulu Hypermarket’s Fashion, Household goods, Electronics & I.T., Toys and Accessories and footwear sections.

“As we mentioned earlier, our expansion plans are firm and Sharjah will get another seven more hypermarkets out of which three will be opened within the next six-month period and we are grateful for the support and patronage we have been receiving from the rulers, citizens and residents of this great nation” added Yusuffali.