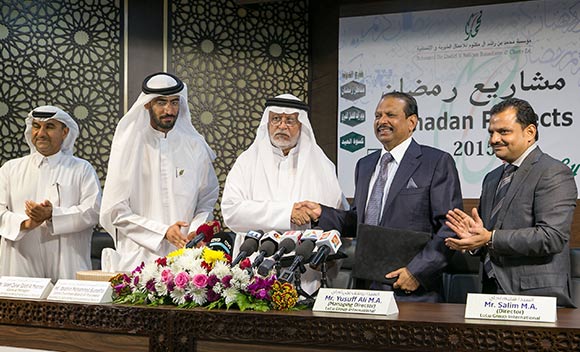 More than 4500 families in all seven emirates will be given Ramadan gift cards worth Dhs. 3.5 million. The cards will amount from Dhs. 1000 to Dhs. 500 to be redeemed for food items throughout Ramadan at any LuLu outlet in the UAE. This is the 8th year such a joint initiative is being carried out. A total of Dhs. 20 million worth of charity cards has so far been issued during the eight-year period.

Under the directives of His Highness Sheikh Mohammed Bin Rashid Al Maktoum, Vice President and Prime Minister of the UAE and Ruler of Dubai, Mohammed Bin Rashid Al Maktoum Charity & Humanitarian Foundation engages in charity work within and outside the UAE during the Holy Month of Ramadan. As part of its constant drive to deliver necessary support to various segments of the society, funds are offered to needy UAE nationals and residents and to people in a number of friendly countries around the world.

Ibrahim Boumelha said, “More families will benefit from the project this time and this project is of great importance to the Foundation as it cooperates with its partners in charity within the UAE for the distribution of the smart cards. We also extend our gratitude to LuLu Group for partnering with us for this noble cause.”

Yusuff Ali M.A. said, “This is an honour for us to be a part of such a noble cause and we thank His Highness Sheikh Mohammed Bin Rashid Al Maktoum, Vice President and Prime Minister of UAE and Ruler of Dubai, for his vision to bring happiness in the lives of under privileged during the holy month of Ramadan.
The foundation offered its best efforts to serve residents in the region during Ramadan to develop an action plan for early implementation to reach the beneficiaries in the right time avoiding last-minute rush.”
Highlights: