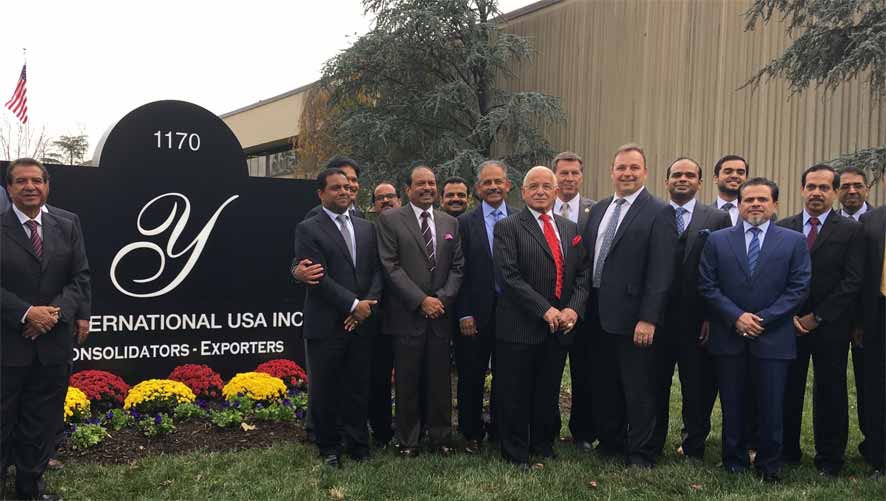 The world –class export center will purchase, process, re-label and export food, non-food, chilled and frozen products made in the U.S. In the first phase there are 75 employees which is expected to eventually grow to 200 to 250 employees within I year.

The facility was formally inaugurated jointly by Mayor Robert B. Giangeruso, Mayor Michael J. McPartland and VINAI THUMMALAPALLY, the Executive Director of SELECT USA in the presence of Yusuffali MA- Chairman, Saifee Rupawala, CEO, Ashraf Ali MA – Executive Director and Mohd. Althaf – Director of LULU Group. Attendees at the ribbon cutting, including local and foreign officials as well as members of the Indian-American business community from around the country, were thrilled by the impact the company can have throughout the state.

In his remarks Yusuffali MA thanked the officials of SELECT USA, CHOOSE NEW JERSEY and State & county officials for their great support in helping LULU launch their maiden venture in USA.

Speaking to media during the ceremony Choose New Jersey CEO and President Michele Brown said "In addition to bringing new jobs to our state, Y International's export center will give New Jersey and U.S. manufacturers the opportunity to reach new markets in the Middle East and beyond.”

The US$ 6.6 billion turnover Lulu Group, operates hypermarkets, supermarkets and shopping malls, in addition to wholesale distribution, food processing and hospitality with operations in 37 countries, including the GCC, India and Far East. The company has a 32 percent market share in the Middle East.

Brown said New Jersey is a perfect fit "Our state is so diverse; we have populations from so many different countries,” she said. “We felt they would feel both welcome and at home. The business they will be conducting out of this site is meeting American companies to buy goods and products to then export to their own consumer base,” she said. “We have literally thousands of companies in food in New Jersey."

New Jersey, Brown said, is also home to companies in the apparel and consumer goods industries, which could serve the needs of the company’s Hypermarkets.

“Our group has been importing U.S. products for a long time to cater to more than 700,000 shoppers who come to our 131 hypermarkets daily," Yusufali added highlighting the longstanding relationships between Lulu and farmers and manufacturers in the country, with a special emphasis on California. “There has been growing demand for U.S. products throughout our retail chain stores, across the GCC, India and Far East” he concluded.

As per the latest report by Deloitte International, LULU is ranked among the Top 10 fastest-growing retailers in the world.

An official from the Kingdom of Bahrain embassy in Washington D.C., Mohamed Bahzad, said Ali's company, aside from being successful, also is known for its corporate social responsibility. Bahzad said that a strong relationship with the U.S. is a core strategy for Bahrain, where Lulu is opening its 10th market, and anticipates a market will open soon in the U.S.