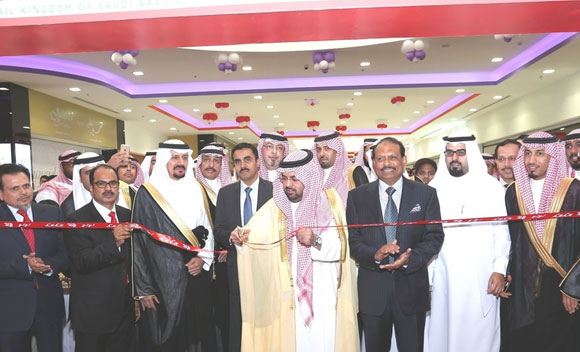 A large number of local and expat crowd were anxiously waiting for the grand inauguration in the hypermarket premises and to grab attractive inaugural offers. The new hypermarket which is 5th in the Kingdom is conveniently located at King Faisal Street in the Jubail industrial hub of the Eastern Province.

“We are very clear in our approach to expansion in the Kingdom and I am very confident that this great country will further prosper under the visionary leadership of Custodian of the Two Holy Mosques H.R.H. King Salman Bin Abdulaziz Al Saud and Crown Prince H.R.H. Muqrin Bin Abdulaziz Al Saud, and we are fully committed to continuing our forward march,” said Yusuff Ali M.A. after the inauguration. He also said that the Kingdom will see seven more hypermarkets coming up in the next 22 months in various locations across the country, wherein Dammam will be the next in line for opening.

This latest hypermarket from LuLu is expected to become the latest shopping destination of choice for residents of Jubail. In addition, and in true tradition of LuLu stores across the Gulf, the hypermarket will feature the widest choice of world class brands at the fairest prices and also offers a whole world of shopping with a good selection of brands and product lines under one roof. LuLu’s winning formula of value for money and quality shopping will be a matter of delight for the residents of Jubail who will cherish the pleasurable shopping experience and the economy it offers.

With 3 stores in Riyadh, 1 in Al Khobar and seven Commissionaires in Aramco in its entity, LuLu has firmly established itself as one of the most preferred retail destination for both locals and the large expatriate community residing here. The chain records a whopping 710,000 plus footfall every day and is the preferred destination for diverse and multi-ethnic shoppers. The LuLu philosophy has always been ‘good quality products at fair prices with friendly service’.

LuLu Hypermarket which employs more than 32,000 people from 38 countries in its various locations, has a very clear human resource development policy especially when it comes to providing training and job opportunities to the Saudi youth. LuLu employs Saudis in almost all categories and continuously supports Government’s vision of providing jobs to the local youth.

“Providing job opportunities to local youth is one of our core focus areas and we will continue to recruit more nationals, majority of whom are women work force, into our operations in different categories from frontline sales staff to technical and managerial positions. With oil price showing positive growth and recession is thing of past, we see tremendous development taking place in Gulf economies and we intend to play our part in the growth process,” added Yusuff Ali.