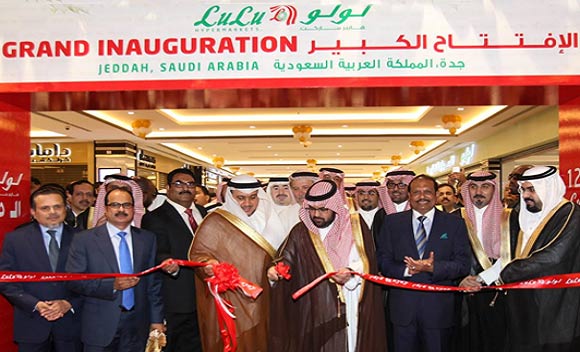 Jeddah: LuLu Group further expanded its operations in the hugely potential KSA market with the opening of its 125th hypermarket in Jeddah on 29 May. It’s the 7th LuLu Hypermarket in Saudi Arabia, while 12 more are slated to be open by 2018 with investment of SAR 800 million in the next two years.

The latest hypermarket which is located conveniently in Amir Fawaz district of Jeddah, was inaugurated by HRH Prince Saud Bin Abdullah Bin Abdul Aziz and HE Mazen Mohammed Batterjee, Vice Chairman of Jeddah Chamber of Commerce, in the presence of many top officials and dignitaries including HE Arif Ali Al Taboor Al Nuaimi, UAE Consul General.

Speaking to the media after the launch, Yusuff Ali M.A., Chairman of LuLu Group, said “We plan to launch 4 more hypermarkets this year, including one more in Jeddah and one each in Hail and Hofuf. By 2018, we will launch 8 more hypermarkets in the Kingdom including the holy cities of Makkah and Madina.”

With 3 stores in Capital Riyadh, 1 each in Al Khobar, Jubail, Dammam, and 8 Commissaries in its entity, LuLu has firmly established itself as one of the most preferred retail destination for both locals and the large expatriate community residing in the Kingdom. The newest hypermarket is spread across an area of over 200,000 sq. ft. and has the widest range of world class products at the most competitive prices.