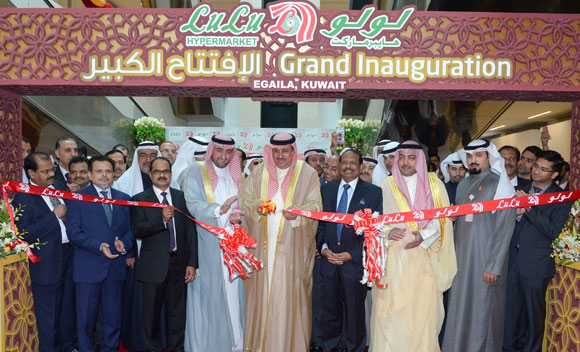 Kuwait: LuLu Group has further expanded its presence in the State of Kuwait by opening its latest hypermarket in Egaila in the Ahmadi Governorate. The new hypermarket, which is also the 6th in Kuwait, was officially inaugurated by H.E. Dr. Abdullah S. Al Owaisi, Under Secretary, Ministry of Commerce & Industry, in the presence of Sheikh Malek Al Hamoud Al Malek Al Sahab, Sunil Jain, Indian Ambassador to Kuwait, and other several high-ranking officials from various government departments and representatives from local business communities.

Located at Sama Mall in South Kuwait, the new 150,000 sqft LuLu Hypermarket will serve the residents of Egaila and its surrounding areas with a one-stop shopping destination for the growing city dwellers, which include nationals and expatriate community. As always, LuLu Hypermarket provides the widest range of quality and value-for-money products all under one roof.

The product mix in LuLu Egaila will also include a wide selection of premium UK and US goods, including special products air-flown for freshness. The outlet has also introduced inaugural offers and deals for a range of products at attractive prices.

Speaking after the inauguration, Yusuff Ali M.A., Chairman of LuLu Group, said “Kuwait has always been a preferred destination for us because of its stable political environment and promising market. We thank His Highness the Amir Sabah Al Ahamad Al Jaber Al Sabah and the people of this country for encouraging us in all our expansion strategies and efforts in Kuwait”. The group has also plans to open 4 new hypermarkets in various regions of the country in the next two years in a phased manner.

Regardless of the challenges arising from the volatile oil prices, Yusuff Ali expressed optimism on the economic outlook of the country. “We’re very optimistic based on the circumstances in general. The impact of fluctuating oil prices is not going to distract us from the long-term goals of our business in Kuwait”.