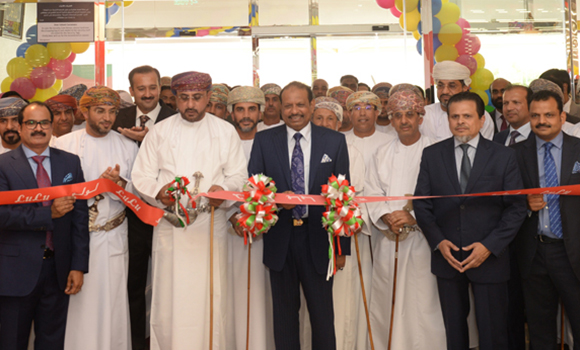 Rustaq : LuLu Group, region’s retail major has further strengthened its presence in the Sultanate of Oman by opening its latest hypermarket in the town of Rustaq in Al Batinah region.

The new Hypermarket which is also the 129th of the group was officially inaugurated by H.E. Sheikh Hilal bin Said Al Hajri, Governor of South Batinah in the presence of several high-ranking officials from various government departments and representatives from local business communities.

Located in the prime area of Rustaq, the new store is spread an area of about75,000 square feet. The new store will feature will feature complete retail offerings including full groceries line, home appliances, electronics, IT Products, Stationery, sports, life style and fashion brands and services ancillary to the business of hypermarket under one roof.

Speaking on the occasion, Yusuff Ali MA, Chairman of Lulu Group said,” “We are glad to have unveiled yet another project in Oman, which clearly specifies that all our expansion strategies are fast progressing and are on track. It has been our policy to bring world class shopping experience closer to the people in the outskirts rather than making them drive long distance to bigger cities”.

“We thank His Majesty Sultan Qaboos Bin Said and the people of this country for the encouragement and support, which have always remained driving forces for us to set our goals and work towards it, he added.