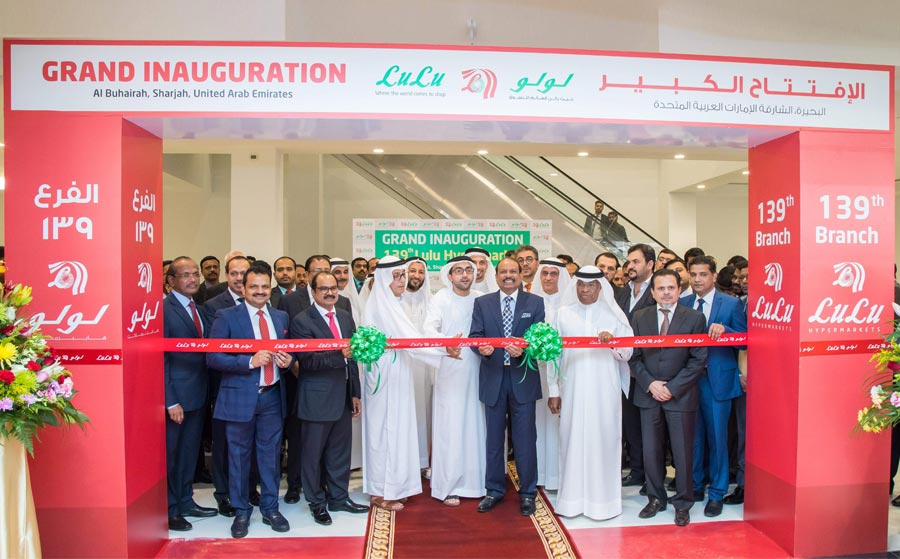 After the inauguration Shaikh Fahim bin Sultan Al Qassimi and other dignitaries were led on a guided tour of the hypermarket by Yusuffali MA and briefed them about the various sections, unique features and amenities.

“This is our fifth store in Sharjah and we are extremely happy with the support and patronage we have been receiving from the rulers, citizens and residents of this great nation,” said Yusuffali MA, Chairman of LuLu Group. “It has been our policy to bring world class shopping as close as possible to the shoppers rather than make them drive long distance. Now with more than 37 sourcing offices worldwide including USA, UK, Africa and Far East, we are fully equipped to serve the diverse population of this cosmopolitan country.

With the opening of this new market, citizens and residents staying in Buhaira and adjoining areas will have world-class shopping closer to them at most attractive and competitive prices” concluded Yusuffali.

The hypermarket which is 139th store of the group, is spread over an area of about 100,000 square feet and can be easily accessed by residents of Buhaira and its surrounding areas. The groceries and supermarket section will occupy the ground level while the first floor will showcase Lulu Hypermarket’s Fashion, Household goods, Electronics & I.T., Toys and Accessories and footwear sections.

A major highlight of the newly opened store is that it has an exclusive store-in-store for all 'free from” food range that offer extensive imported line of Gluten-free, Lactose-free, Dairy-free, Yeast-free, Wheat-free, Vegan, Organic, Fat-free, Nut-free, Soy-free, Salt-free, GM-free, Egg-free, free range, no sugar, no-additives, no-preservatives, no-hydrogenated fat and other specialty food from around the world.