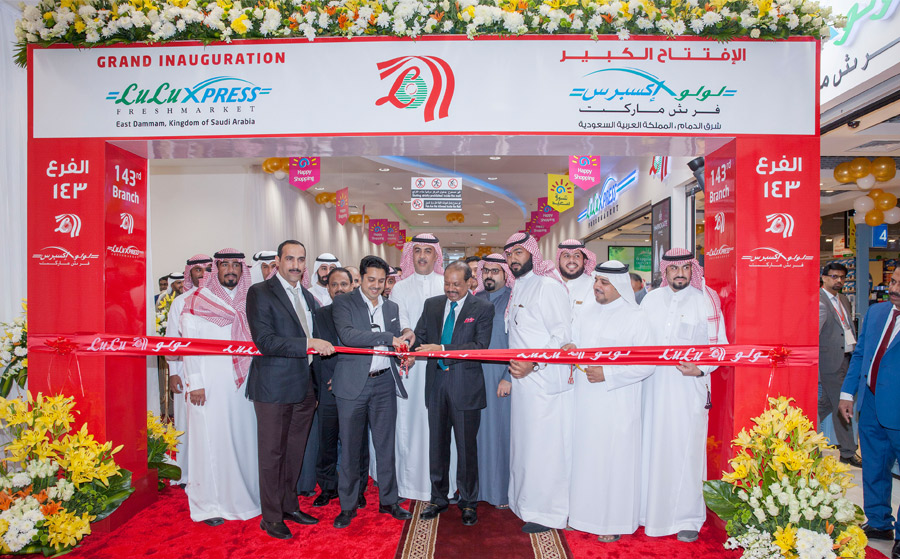 Dammam: UAE’s LuLu Group which have 10 Hypermarkets and 8 Aramco commissionaires in the kingdom has further expanded its presence in Saudi Arabia by opening its 2nd LuLu store in the Kingdom, was officially inaugurated by His Excellency Wajih Malibari, Administrator Area Home Ownership Development Division, Saudi Aramco operations. on Thursday. The occasion was also graced by several high-ranking officials from various government departments, representatives from local business community and prominent citizens.

“We are moving in line with Vision 2030 and the Kingdom’s robust economy and the Government’s investor-friendly policies have encouraged and provided us a favorable environment to continue to establish ourselves and to contribute to the economic growth of the Kingdom. As I mentioned earlier, our expansion plans are firm in the Kingdom and by 2020, the country will get another 20 Lulu Hypermarkets out of which six will be opened by the year 2018. This includes two Hypermarkets in Riyadh followed by one each in Tabuk and Dammam” said Yusuffali M.A, Chairman of Lulu Group at the inauguration.

Currently, our Group employs 2400 Saudi Nationals out of which 1100 are female staff and we consider it as our duty to nurture them as we have a very hardworking, dedicated and productive manpower in Saudi Nationals. As I promised earlier, our goal is to employ 5000 Saudi Nationals by the year 2020 and 10,000 by 2024.” said Yusuffali.

The 143rd Shop of Lulu Group, located on East Dammam commercial Centre, Al Nawras Dist. Dammam and spread over an area of more than 20000-square feet will serve as a major shopping destination for Saudis and expatriates in Al Nawras and its surrounding areas.

Yusuffali further said that “We attribute our success to the visionary leadership of His Majesty & the Custodian of the Two Holy Mosques King Salman bin Abdul Aziz Al Saud, His Royal Highness Mohammed Bin Salman, Crown Prince, the Government and the people of this great country who have always given tremendous support to investments and economic development”.

Currently, we have 10 hypermarkets and 8 Aramco commissaries in Saudi Arabia. This shows the kind of demand for quality shopping that exists here and we are extremely happy to bring again another world class shopping experience as close as possible to the residents of Dammam and its nearby areas” said Yusuffali.

“We are planning to expand aggressively here as the Kingdom is investing heavily in various sectors, which will surely spur all-round growth,” he said. "We have already invested more than SAR800 million till now and intend to further invest SAR500 million by the end of 2019, taking our total investment to more than SAR1.3 billion in the kingdom."

Very recently the Kingdom has witnessed some path-breaking economic policies like the announcement of SR72 billion stimulus package to the private sector by the Custodian of the two Holy Mosques and the unveiling of NEOM Mega City by HRH Crown Prince Mohamed Bin Salman. These historic decisions will see huge investment pouring into the country which will surely benefit the economy of the country by job creation, GDP growth and boosting the local industries in the Kingdom, added Yusuffali.

The new store will not only offer a value-for-money but also ensure shopping experience to the residents of Al Nawras, but will also open a window of opportunity to the local community, which is positive news in the current financial climate, he added.

The opening of the newest Shopping destination saw the group, which is on a vast expansion mode, anchor itself firmly in the modern, customer-centric retail landscape of the Kingdom.