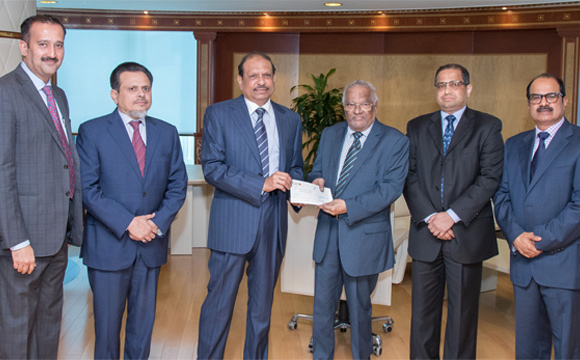 Abu Dhabi: In an effort to support flood relief and rescue operations in Sri Lanka, UAE based retail giant Lulu group has donated an amount of US$100,000 (15 million LKR) to the National Floods and Landslide Victims Operation in Sri Lanka. S.J. Mohideen, Ambassador of Sri Lanka to the UAE received the cheque from Yusuff Ali MA, Chairman of Lulu in Abu Dhabi in the presence of senior officials of Lulu Group and Sri Lankan Embassy in a function held at its head office in Abu Dhabi.

According to Yusuf Ali MA, “UAE has always been and is at the forefront in helping needy people worldwide and we have always supported the game changing philanthropy initiatives launched by the visionary rulers of this great country. We are currently witnessing the “Year of Giving 2017” initiative declared by HH Sheikh Khalifa bin Zayed Al Nahyan, President of the UAE which further instills the value of giving and the importance of lending a helping hand to the disadvantaged people across the world”.

“This natural calamity is one of the worst disasters in the history of Sri Lanka that resulted in the loss of a number of lives and property. The world community has responded by supporting the people of Sri Lanka with an open heart and this noble gesture by Lulu Group is much appreciated and accepted with gratitude by the people of Sri Lanka”, said S.J. Mohideen, Ambassador.

Lulu Group has recently opened its mega food processing and export unit, YAS LANKA PVT. LTD.in Katanayake, near the capital city of Colombo and is also planning to enter the island nation’s retail market in a big way.