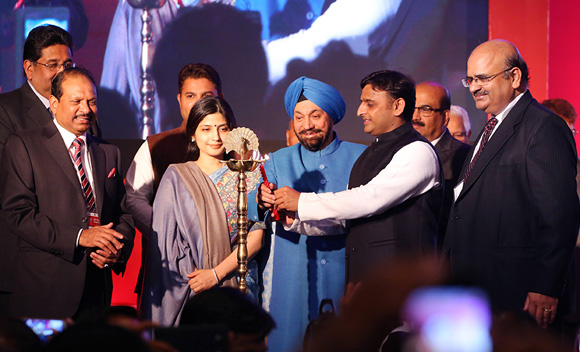 Agra: Yusuff Ali M.A. announced his company’s intent to invest Rs. 1,000 crore in Uttar Pradesh’s state capital Lucknow, where he plans to build a convention centre, shopping mall and a five star hotel. Addressing the crowds at the maiden UP Pravasi Diwas, Yusuff Ali said, “As a businessman I travel to many countries. But whether I go to Europe, Asia or Far East, or in the Gulf countries, I find NRIs from Uttar Pradesh and the state of Kerala. When I went to Kenya, my friends in the business said “Humara tan Africa mein hai, Humara dhan London mein hai, lekin humara man Hindustan mein hai”.

Yusuff Ali’s announcement, which drew loud cheers from the crowds, and an appreciative clap from chief minister Akhilesh Yadav, also drew on his own connection with UP. He said, “I have a very close association with Uttar Pradesh. Nearly 2,000 persons from UP are working in our food processing companies. I was offered a doctorate by different universities of the world, but the only one I accepted was from Aligarh Muslim University in UP. After receiving the doctorate there I mentioned the need for sports and for students to have sports complex to promote health. I donated Rs. 5 crore to construct a sports complex for boys. Now another Rs. 5 crore for girls.” Announcing that the investment in UP will create an employment for 3000 people, he added, “I don’t believe in declarations, we believe in work. If everything is ready, we promise to begin our construction.”

The chief minister said the Pravasi Diwas was a positive start to the state government’s efforts to reach out to its non-residents and for the state machinery to facilitate their connection with roots. “I welcome Yusuff Ali’s promise to invest in Uttar Pradesh. The government will make every effort to ensure that land and any other assistance is provided to him so that he can begin work.” Akhilesh also said he was hopeful that more such proposals for investment are announced over the next day of deliberations of business at the UP Pravasi Diwas.