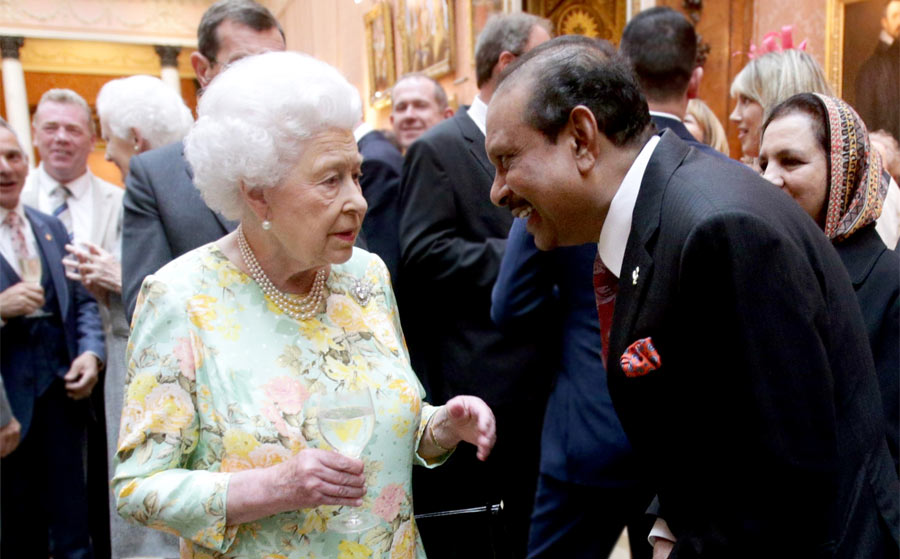 Chairman of UAE based LULU Group has been bestowed with this year’s QUEEN’S AWARD for his contribution towards boosting international trade. Lord Lieutenant John Crabtree, HM The Queen’s special representative handed over the award to Yusuffali MA a during a glittering ceremony held at the Birmingham Council House. Later in the day HM Queen Elizabeth hosted a royal reception for the winners at Buckingham Palace and had close interaction with the chosen few award winners.

The Queen’s Award is announced every year on the Birthday of Queen Elizabeth and is awarded for meritorious contribution in the fields of innovation, international trade and employment generation which results in the tangible growth of UK’s economy. The award ceremony was attended by Anne Underwood, Lord Mayor of Birmingham, Christine Hamilton, Under Secretary of Trade Ministry, Khalid Mehmood, MP and a host of prominent businessmen and trade officials. Elaborating about the Award, John Crabtree said “Y International UK Pvt Ltd. part of LULU Group has played a tremendous role in further boosting UK’s position as an investor friendly destination. They have not only opened up a huge market for the British products worldwide through their operations here but also have contributed significantly in providing job and training opportunities.”

During his acceptance speech, Yusuffali said “I am extremely honoured and proud to receive the prestigious Queen's Award this year. This great recognition will surely help us further strengthen our plans to expand business interests in the UK and continue with our innovations and contributions to the dynamic economy of UK. The fact that we have grown and expanded our operations in such a short span of time is a testament of the pro-development economic policies of UK and we are fully committed to playing our role in further boosting the trade while focusing on key aspects such as highest quality, human resources, and excellent corporate governance".

Y International UK Pvt Ltd, with its huge state-of-the-art operations in Birmingham, sources and exports a wide range of world-class food products to over 136 hypermarkets & supermarkets of LULU Group across the ME, Africa, India and Far East countries. The group which has already invested close to US$ 550 million till now in the UK including The East India Company and London Scotland Yard, will be investing another US$ 52 million in setting up an advanced food processing zone in Birmingham, the work for which will begin next month informed Yusuffali.